Between the Arctic and Antarctica (1st ESO) 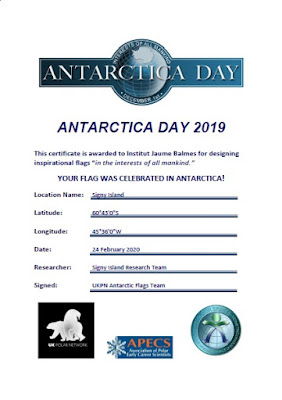 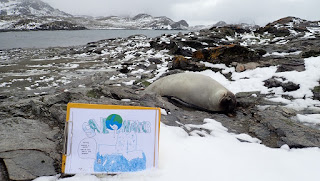 Finally, the flags that you prepared to celebrate Antarctica Day have reached Signy Island in Antarctica.

You can see the pictures taken by the researchers with your flags and some inhabitants of Signy Island.
The UK Polar Network has also sent us some information about the place where your flags were taken.

Signy station a small summer-only station (the smallest of the BAS stations) it is situated on Signy island which is part of the South Orkneys lying at 600 43’S, 450 38’W, which puts it just within the boundary of the British Antarctic Territory, which begins at anything south of 60°.

As such although very cold and very windy at the time we don’t experience really cold temperatures. Although we can experience extremely high winds.

Although small, Signy has a very diverse ecosystem and is home to three species of breeding penguins, the Adelie, The Chinstrap (see photos) and the Gentoo.

Juvenile elephant seals wallow in certain areas of the island and occasionally with form wallows on the beach just in front of the station.

Fur seals start to inhabit the island from the start of January, turning up in small numbers at first but steadily increasing in number to an island population of around 12,000 by mid-February.

Occasionally other less common seals are sighted these are the Leopard, Crabeater and Weddell seal.

Several species of sea birds also inhabit Signy, Skuas, Petrels, and turns to be the most common and as well as a host of flora, mosses, lichens, deschampsia (Antarctic hair grass).

Thanks to all for participating!!!